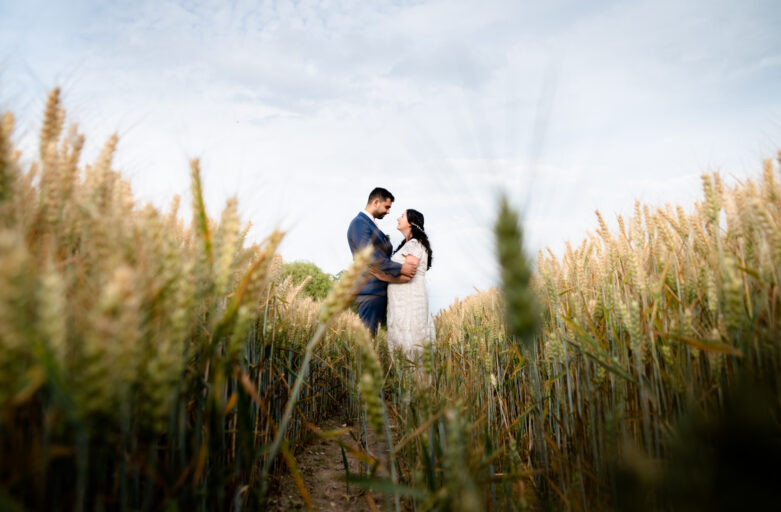 The main change since my last visit is the completion of Phase 2 – the final phase.  Adrian and his team have done an incredible job converting the Eland Barn into a large reception room which can sit 200 people and has an impressive large window to let plenty of natural light in. The car park is cleverly hidden by panels covered with greenery which gives a relaxed countryside atmosphere inside the barn instead of views of multiple car bonnets and wheels.

Due to a certain pandemic that everyone has been talking about, Marie and Edan had to postpone their original plans for a year. They originally booked Hanbury Wedding Barn in 2019 during the early stages of the renovation so they had to imagine the finished venue according to a few sketches. Holding on for a bit longer was worth the wait because Hanbury is now completely renovated and more beautiful than they hoped for.

Those weren’t the only changes to happen. Since they originally booked their wedding, Marie and Edan also had an addition to the family. Their little baby girl was only ten weeks old on the wedding day so it was a fantastic opportunity for family and friends to admire one of the stars of the show.

Anyone who has booked an independent celebrant for their wedding knows it’s often difficult to also be legally married on the same day. The reason is that a civil ceremony is a strictly non-religious event. From the music to the readings you want to include, the content must be free of any religious connotations.  So often couples who only want a civil ceremony won’t be allowed to include some of their family traditions which are often linked to religious beliefs. Some councils have become more flexible recently and Marie and Edan found a way to celebrate their roots by having Christine O’Malley, an independent celebrant to conduct a combined ceremony with the local registry office. She introduced Marie and Edan before handing over to the registrars to deal with the legal aspect of the ceremony. Once the formalities were out of the way, Christine started the second part of the ceremony with Marie and Edan’s story followed by a couple of readings. To conclude, Edan’s father blessed the couple and the groom smashed a glass as per the Jewish tradition. Mazel Tov!

Marie and Edan booked a band who performed two sets of traditional music representing both the Jewish and Irish cultures. As a result, you get a party that is full-on from the beginning to the end. One minute, the groom and his dad are lifted in the air for the Hora dance immediately followed by some Irish step dances.

If you recently got engaged and would like to have a chat about your wedding photography at Hanbury Wedding Barn, get in touch